Today I will do the test of the latest TEAC turntable in my TEAC TN-3B review. The TEAC TN-3B is very attractive, elegant, and modern at the same time. It is not the first time that TEAC serves us with such a sense of luxury, and competing turntables are not even close. The shape itself is typical, with a rectangular plinth, but an excellent impression is provided by the finish.

There are three versions – black, white, and cherry (in my opinion the prettiest, covered with many layers of varnish).

Added to this are silver elements – conical legs, tonearm, cover … On many turntables, TEAC uses two switches with a round rosette and distinctive truncated spindles; There is only one in the TEAC TN-3B and this is enough to turn the revs on and off and select the revs ( 33.3 and 45 rpm ). The plinth is made of an MDF board, with an additional layer of “honeycomb” added to the bottom. 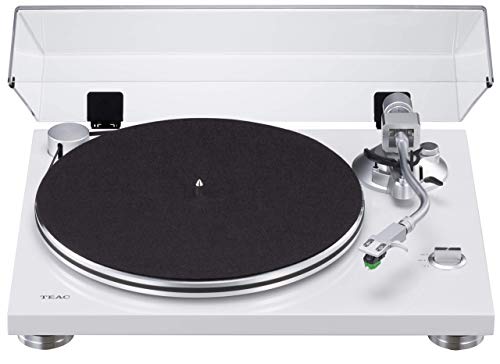 The belt drive is built a bit differently than the competition. There is a solution with the motor and the belt hidden under the turntable canopy, using a smaller drive pulley, while in the Teac TN-3B turntable, the belt is guided along the outer edge of the platter, and the motor is installed in the corner of the plinth, in rubber absorbers, and covered with a cylindrical, silver cap.

Moving the disc axis away from the motor improves the damping of vibrations coming from the drive unit. TEAC also emphasizes the advantages of such a drive(the belt drives the outer part of the plate) – better rotation stability. The wow&flutter index is the lowest in TN-3B.

The platter itself is a typical, cast aluminum, underneath you can see a smaller drive flange, not used here. The mat is felt. The cartridge is an Audio-Technica AT-VM95E, the same as in the AT-LPW40WN, you can see that it is quickly gaining recognition.

TEAC is proud of the S-Shape tonearm used, so characteristic of many of the best Japanese designs from years ago. The tonearm has an effective length of 223 mm (as for competitors), it was designed for TEAC by SAEC, a world specialist in this field. The design has a detachable, straight head, precision spherical bearings are used in the massive suspension frame.

Teac is proud of the design of the tonearm, prepared in cooperation with SAEC.

Not only the counterweight ring, but almost all elements seem very massive here. The tonearm in the TEAC TN-3B can handle heavier cartridges than the corresponding solutions of competitors (the maximum weight of the cartridge, in this case, is 12 g and 23 g – respectively without and with the headshell – while in the TD201 it is 6 g, and in the AT-LPW40WN 17 g – here with the head). The headshell itself in the TN-3B is also the heaviest (8.5 g vs 12 g AT).

S-Shape constructions (in TN-3B) are often predisposed to work with heavier inserts, which is perfectly confirmed here. The trick is to optimize the tuning (setting the precise resonant frequency) of the tonearm and cartridge. And it is this difference that can most determine the sound of turntables equipped with the same cartridges. The plinth construction, drive, and electronics (in the version with an attached correction system) will also have an impact.

The Teac TN-3B turntable can also be praised for the connection panel (and what is behind it). Only in this model, we can find a USB output and the ability to rip CDs to a computer disk. The turntable has a built-in analog-to-digital converter with a resolution of 16 bit / 48 kHz. The JRC NJM8080 operational amplifiers with low noise levels are used in the corrective preamplifier (it can of course be turned off).

The extensive connection panel has, in addition to the typical set of sockets, also a USB output, which allows you to rip records to a computer.

Teac TN-3B will not tire us with the complicated assembly accompanying the first launch. It is even a bit easier than the competitors, you do not have to struggle with passing the belt in the narrow cutout of the plate. Of course, we mount the plate, drive, and screw the head (with the cartridge installed), the obligatory action is to set the pressure of the needle.

It would seem that the Teac TN-3B and the Audio-Technica AT-LPW40WN turntables are so similar, above all equipped with the same cartridges, that the search for sonic differences will be a difficult task, to say the least.

The main features of both designs are actually similar, but there are also many changes, even surprising ones. This turntable sounds coherent and energetic. “Coherent” … can be written about any turntable, but energetically – certainly only about some of them. Fortunately, not only the most expensive ones, as you can see, also happen in this price range.

Music flows with the TN-3B even lighter, faster, and more agile, the bass is more contoured, tight, and rhythmic. As for an analog, the sound is quite hard and specific, but this should not be considered a disadvantage that diminishes musicality – TEAC efficiently transmits both information and emotions. In the tonal dimension, it is well balanced, although a large proportion of treble will not fit everyone’s imagination and expectations for the analog.

TEAC TN-3B provides better clarity and detail, thereby dazzling less softness and sweetness. This turntable plays with a flourish, openly sound, it does not aim at technical precision and transforms naturalness into a more joyful than romantic sound.

The quality of the treble is reflected in the timbre of the instruments – the guitars are very expressive, and the transients are sharp, but pleasant because they are effective.

Less delicate and sophisticated than the AT-LPW40WN, less saturated and uncompromising in promoting the midrange than the TD201, the TEAC TN-3B can show the most and the fastest, which will not mean the best for everyone. In this case, the built-in preamplifier is so good that achieving better results would require considerable investment.

TEAC TN-3B is a small masterpiece.  The record player is quick to assemble and adjust. In addition, the AT-VM95E cartridge in the present tonearm combination proves to be a small sound miracle. The internal phono EQ is just as enjoyable as the AD converter for digitizing records. If you are looking for a really good all-around turntable for everyday life, you should consider buying the TEAC TN-3B turntable.

TEAC TN-3B has a higher price but this is justified. This turntable is a small masterpiece.
Get it now
Facebook Comments Box
5/5 - (14 votes)