The Ortofon 2M Blue represents the first upgrade step in Ortofon’s popular 2M series. It costs twice as much as its little brother 2M Red, but according to the datasheet, it seems to be technically very similar. What’s going on there? Is the significant additional price worth it? I subjected the 2M Blue to an extensive listening test – including direct comparisons to the 2M Red and to other systems that are comparable in price.

You can download the manual here->Ortofon 2M Blue Manual

Ortofon 2M Blue Sound Test: Clear and Neutral Gets Ahead

In terms of usage frequency, the 2M Blue cannot, of course, come close to the Ortofon 2M Red. If only because it is used much less frequently as a factory assembly for complete players. But sometimes it is: Thorens, for example, sells the upscale direct-drive TD 403 DD with the Ortofon 2M Blue MM cartridge as standard. An excellent choice, as I found during our review of this player.

What the Thorens tonearm is fine with, the Technics tonearm should like it just as much. The Technics SL-1210 Mk7 actually got along very well with the Ortofon 2M Blue. But I’ve also heard the system play exceptionally well in Rega tonearms and even in a Linn Ekos. In the Ekos, the Blue served as a workhorse for digitizing a larger number of LPs. Unless it crackles, the resulting recordings are indistinguishable from streams from digital sources. No imperfections and no tonal deviations betray the vinyl origins of the music. This is the greatest strength of the 2M Blue: it sounds amazingly neutral, uncolored, and low in distortion. It doesn’t impress with its cliché analog sound, but rather with its honesty – and makes good records sound even better and analog sounds even more analog.

Harmonious optics: The needle slot closes perfectly with the body, the “2M” signet repeats the model color. Apart from the imprint, the blue and red bodies are identical. | Image: Ortofon

The Blue is exactly the same loud as the Red, which favors the comparison. In this way, level differences cannot be misinterpreted as better or worse sounds or more or fewer dynamics. In the bass, the Blue works just as powerfully and drivingly as its cheaper brother, and yet it often comes across as a touch slimmer. The music gains in transparency, especially in the upper bass: while the Red simply distributes the basic tone generously, but also somewhat carelessly, the upper bass tissue becomes more transparent with the Blue, richer in variants and fine structures. That’s definitely better, even if mediocre rock records don’t benefit dramatically from it. With good, dynamically intact productions, on the other hand, the sun rises when switching to Blue.

Small, decisive difference: the Blue needle, photographed here from below, has a bare diamond rod at the end of its aluminum cantilever. This is much slimmer than the Red’s diamond-topped brass cylinder. Because of the diamond’s low density, it’s also significantly lighter. In this way, it can better follow the enormous accelerations that require particularly high tones. | Image: Ortofon

Finally, the Ortofon 2M Blue is in a completely different class when it comes to high-frequency resolution and the richness of tones. The articulation of a singing voice, the sliding of fingers over guitar strings, the beating in the decay of a grand piano – all of this is simply livelier, closer and more penetrating here than with the cheaper Red. The music also doesn’t darken as significantly with the more expensive cartridge towards the end of the LP as with the cheaper system.

This is a clear indication that the Blue’s needle keeps more precise contact with the grooves. And gives up this only very reluctantly, even in very demanding situations. Of course, that will happen at some point. The exotic line contact and hyper elliptical cuts weren’t designed for fun. But they don’t just have advantages either, and first of all, they have to play music as harmoniously and unaffectedly as the Blue manages to do with 95 percent of all pressings.

Technically, the Blue is very similar to the Red, as already mentioned: It is a relatively loud MM system that outputs a generous 5.5 millivolt signal voltage at standard full level. Slightly less low-noise MM phono inputs can also cope well with this, and the jump in level when switching to CD is not quite as extreme. It cannot be completely avoided, but strictly speaking, it is not the “too quiet” record player to blame, but the CD player that is too loud. 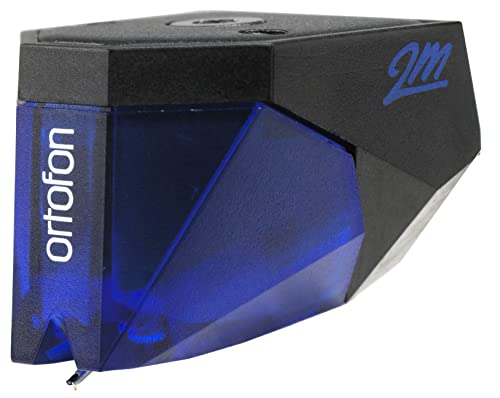 Like the Red, the needle of the Blue is elliptically ground and has exactly the same rounding radii of 8 and 18 µm respectively. With the Blue, however, the entire stylus is diamond, not just its bottom tip. Such a “naked” needle is lighter and at the same time more durable than the bonded elliptical diamond of the Red. In addition – because it is worthwhile here – it receives an even more precise cut and an even finer polish than the bonded diamond in the Red.

Easy Assembly Thanks to an Integrated Thread

Mounting cartridges can be frustrating. With the Blue it’s almost fun – because the large system body is easy to grip, the needle guard doesn’t just fall off and the screws almost find their way into the fixed threads on the top by themselves. In the Linn Ekos, however, some fine work with the connecting wires is necessary because its headshell is cut very tightly and the expansive 2M cuboid almost doesn’t fit in. But only by the skin of his teeth.

The Blue is even less forgiving of adjustment errors than the Red. But you also get clearer feedback if you want to adjust anti-skating or arm height (aka VTA) by ear, for example. If the Ortofon 2M Blue sounds too bright and hissing, be sure to check the azimuth and try a degree to the left or right of the exact parallel position. Correctly adjusted, the 2M Blue plays in a pleasant way in high resolution, but never poisonous or shrill.

If you are simply looking for an honest, competent cartridge without any fuss or sound effects, you will be extremely satisfied with the Ortofon 2M Blue. What is important, however, is a good adjustment at all levels, a good and precisely positioned tonearm, and, last but not least, a good phono preamplifier – then the Ortofon 2M Blue plays incredibly colorful and lively and overall better than you would expect at this price.

Ortofon 2M Blue is a definitely an upgrade from Ortofon 2M Red. Its incredible neutral sound without any discoloration and distortion will definitely delight you.
Get it now
Facebook Comments Box
5/5 - (1 vote)