More than half a century after KLH’s Model Five speakers were at the height of their fame, their phenomenal modern performance saw the light of day. So we bring you KLH Model Five Review.

KLH, originally owned by Japan’s Kyocera, produced the Model Five between 1968 and 1977, speakers that are still considered one of the most popular in the U.S. market, where they sold the most. The original KLH no longer exists today, but the right to use its name a few years ago went to former high-ranking Klipsch and Voxx Electronics employees. They transferred the headquarters of this new-old brand to America and continued where KLH left off in the late 1980s.

This, of course, is not a review of the original Model Five speakers, but their new release, which retains the same name, but in every other aspect brings major changes and necessary improvements. Moreover, although, with a price of $2500, these are some of the most purchased speakers that we had the opportunity to test in 2021, we can also rank them among the best without thinking.

The amount of excitement, raw energy, and fun that the Model Five speakers deliver will make their owners worth every penny spent.

You can download the manual here->KLH Model Five Manual

As is clear from the photos (and legendary status), the Model Five is a so-called modern retro speaker, which could include models such as the JBL L100, Wharfedale Linton Heritage, Klipsch Forte III, or virtually any from the English Harbeth range. These are speakers that can technically be placed in floor-standing speakers but are lower and noticeably wider than modern stand-alone speakers. The huge subwoofer is directly responsible for its width, which in KLH’s Model Five is as much as 254 millimeters (10 inches). There are 100mm (4 ”) midranges and 25mm (1”) tweeter drivers on the top half of the speakers. 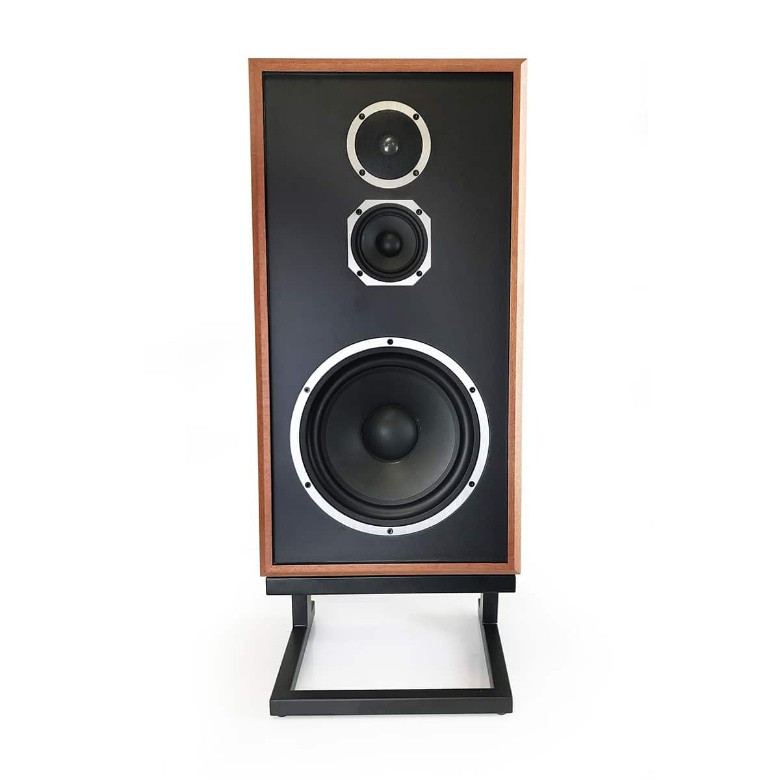 It is, therefore, a three-way speaker system, with an acoustic suspension design, and second-order electroacoustic switches, set at 380 Hz and 2,850 Hz. The subwoofer and midrange have a pulp-paper cone and inverse rubber suspension, and the tweeter is equipped with an aluminum dome and soft rubber suspension. 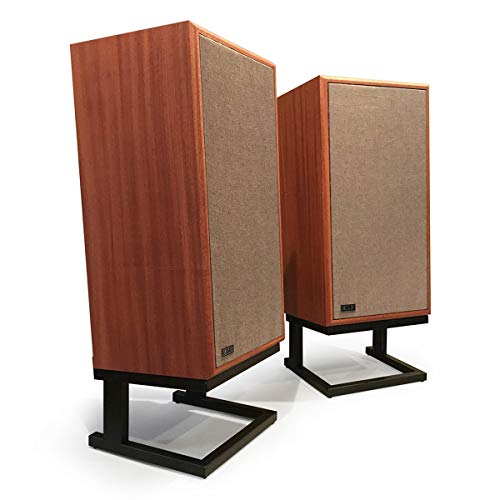 Where are the bass reflex apertures? There are none because they are sealed speaker boxes. The speaker boxes are made of reinforced, 19-millimeter MDF, and their front is covered with canvas grills, which are magnetically fixed to the speakers. The boxes are available in two different veneers, African mahogany, and English walnut, and with two mesh colors. We tested a mahogany variant, and its aesthetics were our only unimpressive aspect of KLH’s speakers. A darker version of English walnut paired with lighter mesh seems much more striking and luxurious.

The meshes are attached to the speakers with a magnet

Given that these are floor standing speakers, whose height is only 66 centimeters, the question arises – how to bring them to the height needed for an optimal listening experience, where the tweeter unit would be directed towards the listener’s ears?

You will find the answer in their box, in the form of the enclosed pair of steel racks. They raise the speakers to a height of about 87 centimeters and give them an inclination of 5 °, which provides the ideal height and orientation for listening from the couch or armchair. Of course, the stands also increase the weight of the speakers, from a whopping 20 to about 24 pounds.

At the back of the speaker are a pair of gold-plated terminals and a switch with three positions: Lo, Mid and Hi. It suppresses frequencies above 400 Hz, with the aim of better integration of speakers in different rooms, more precisely, reducing their potential penetration. When the switch is in the Hi position, there is no change in its output characteristic. In the Mid position, frequencies above 400 Hz are attenuated by -1.5 dB, and in Lo by -3 dB. The sensitivity of the speakers in the space is as high as 90.5 dB, so they are very appreciative of the drive and do not require abnormally strong amplification to express all their luxury.

In addition to the terminal, at the rear we find a switch for attenuation of frequencies above 400 Hz. Interestingly, the neutral position is not “Mid”, but “Hi”

The recommended power range is 20 to 200 W, and we tested them in combination with Cambridge Audio’s CXA60 amplifiers (60 W per channel, class AB) and EVO 75 (75 W per channel, class D) – in both cases we had the impression that there are no difficulties in controlling KLH speakers.

Although they do not have bass reflex openings, it is not advisable to stick KLH speakers against the wall, because they produce extremely loud and powerful sounds. Fortunately, they don’t even need an abnormal amount of space – it will be enough to move them about eighty centimeters away from the wall. The left and right channels should be about two meters apart, and they should be rotated very slightly, just enough so that the front units are directed towards your ears.

After such elementary adjustment, what follows can be described in two words: pure enjoyment.

As already mentioned, the Model Five speakers produce a large and unusually wide sound, which can certainly fill even larger rooms. In such a grandiose sound image, information about the arrangement of vocals and individual instruments is completely retained, and with unprecedented ease, one gets the feeling that the sound does not come from the boxes, but that it originates in the space between them.

But the size and organization of the sound stage are not the only aspects in which KLH speakers excel. Many users will be even more amazed by the fantastic deep frequency reproduction. The basses are extremely solid, well-defined, and layered. This characteristic of Model Five in practice has delighted us in a wide range of music genres, from rock and metal, wherein the lower part of the frequency spectrum often hides various details and finesse, all the way to rap, EDM and modern pop, ie genres in whose we do not look for special eloquence in the bass, but we prefer raw power and concrete strike. These are all specialties of KLH’s Model Five speakers.

The vocal part of the frequency spectrum sounds full, smooth, warm, and extremely pleasant, and the detail of the sound from the bass is transferred to the mid frequencies, which retains the genre versatility of these speakers. However, this is not a typical audiophile hyper-detail, which often becomes an end in itself. Quite the opposite – the presentation of the Model Five speakers is in the function of their extraordinary musicality, which will make you blow the dust off old CDs and vinyl and listen to all the songs you once loved, just to hear how they sound in the performance of these speakers.

At no point did the aluminum dome of the tweeter seem too thin or metallic. Moreover, if someone had told us that it was made of some other, non-metallic material, we would have readily believed him. All in all, the KLH Model Five speakers are endlessly energetic and indescribably fun to listen to, and still cultivated enough that they don’t become aggressive at any point. The built-in speaker units are seamlessly connected, the sound stage they manage to build is huge, and to experience it all, you won’t have to spend two weeks looking for the ideal micro-location in the space, nor will you need a home power plant to power them.

The new version relies directly on the original speaker with its retro look, but in terms of technology and architecture, KLH units are deep in the 21st century. The three-way Model 5 features purpose-designed units for perfect reproduction of the critical midrange, non-resonant bass housings, and midrange units are cast, the crossover is made up of 13 elements with Mylar capacitors. In order to better adjust the sound to the space, it is possible to adjust the acoustic balance on the speaker in three stages.

You will get a perfect and balanced sound – this speaker is worth every penny.

With these speakers, the manufacturer gives a ten-year warranty.

Fantastic 'modern retro' speakers, which few will be able to afford, despite being cheaper and better than many other speakers of this type.
Get it now
Facebook Comments Box
4.5/5 - (2 votes)