This is my first speaker’s review – DALI Oberon 3 Review.

OBERON 3 bookshelf speakers are in an affordable category and bring a classic design in a modern outfit, with several DALI specialties. The OBERON series was introduced in 2018 to fill the gap between ZENSOR speakers, which I still remember today as one of the best affordable boxes, and the more expensive OPTICON line. In less than three years of market presence, the OBERON series has found its way to many audiophile homes around the world, winning the prestigious EISA award and other accolades along the way. The series includes two shelving and three floor-standing models, including the new three-system OBERON 9, with a thin-profile wall model and a central speaker for assembling a home theater system. On this occasion, I managed to get the OBERON 3 bookshelf speakers for testing, which should be the right thing for enjoying good sound in small and medium-sized rooms.

Build and Compatibility – Outside and Inside

With a height of 35 centimeters, OBERON 3 fits perfectly into the size of a slightly larger bookshelf speaker. Its shape is classic and without special design bravado, which means the correct shape of the square.

The box is made of medium-density MDF boards (MDF), which are precisely defined on a CNC machine, while the rigid construction implies reinforcements in the interior. The Danish company states that special attention was paid to the removal of unwanted resonances, so the material for acoustic dumping was also placed inside the cabinet. The finish of the speakers is made of impeccably processed high-quality vinyl, and OBERON 3 is available in imitation of black ash, light oak, and dark walnut, as well as white. However, Scandinavian designers did not allow these speakers to go unnoticed, so they gave them an accentuated front panel, which is visually separated from the rest of the cabinet – it is made in satin black with ash and walnut finishes, or white for the other two variants. In addition, although I usually do not pay attention to protective masks, because an increasing number of modern speakers are designed to look better without them, in this case, I can not ignore them – DALI delivered really beautiful masks with attractive rounded corners, made of quality canvases and look especially good in the Mountain Gray finish.

After removing the mask on the front, we come across a standard two-way topology, which includes a tweeter in the upper part and a fairly large midrange-subwoofer unit below it. The new soft dome tweeter was specially developed for the OBERON series and equipped with an extremely light textile membrane with a diameter of 29 millimeters – in fact, the manufacturer claims that this membrane is half as light as most others on the market. The increased diameter of the diaphragm ensures the movement of more air with less excursion, which improves precision, while the large tweeter frame is modeled on the more expensive OPTICON and RUBICON series, and therefore guarantees excellent dispersion and low coloration. Beneath the tweeter is a mid-bass unit with a 177-millimeter-diameter membrane, which is made of wood-fiber-reinforced paper pulp and features a distinctive dark purple color. DALI states that this combination forms a rigid and light surface, as well as that the membrane as a whole behaves very predictably. In addition, a 15 percent larger surface area than conventional 165 mm diaphragms allows, as with a tweeter, to achieve higher sound pressure with less movement, which contributes to greater sound accuracy. A large ferrite magnet with a patented SMC solution, which significantly reduces mechanical distortions, is responsible for starting the mid-bass membrane. 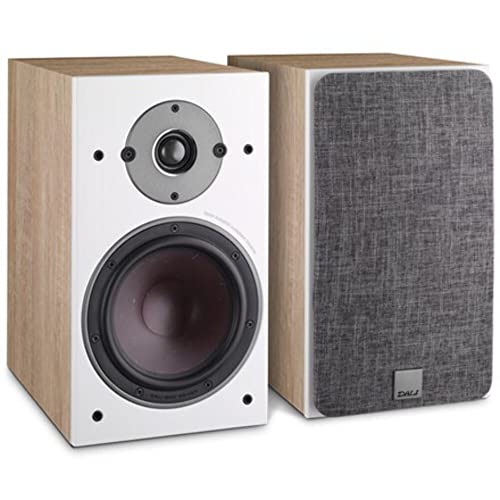 The setting on the back is quite common and involves a medium-sized bass reflex opening in the upper part, while in the lower part there is a recessed panel with one pair of quality speaker terminals, made of a gilded base and transparent plastic formwork. The manufacturer does not provide more detailed information about the crossover, except that the cutting frequency is set at 2.4 kilohertz. In addition, the declared characteristics state the frequency range from 47 hertz to 26 kilohertz, with a sensitivity of 87 decibels and a nominal impedance of six ohms, and a 25 – 150 W power amplifier is recommended for starting.

You can download the manual here -> Dali Oberon 3 Manual

After unpacking and connecting to the system, it becomes clear that OBERON 3, which already looks very good in the photos, looks even better live. The combination of colors can be a matter of taste and fit into the ambiance, after all, there are four color combinations available, but the quality of the finish cannot be disputed. The extremely blended finish is characterized by a natural pattern and a beautifully pronounced texture, so it is one of the best vinyl coverings I had encountered. The proportions of the cabinet are also very well measured, so OBERON 3 simply radiates quality and timeless aesthetics.

During playback, the constructor’s promises of a low degree of vibration and coloration are realized, so OBERON 3 creates a very, very precise sound. The tones are completely clean and perfectly defined in the entire audible spectrum, which is reflected in a very clear display even during demanding sections. Each individual tone can be easily understood and has a clearly defined duration, as well as credibly presented acoustic determinants of the instrument. In addition, it is very positive that the tested speakers are quite insensitive to the volume level and retain the complete display of tones even when listening very loudly, which is not always the case in this affordable price category.

In addition to neutral balance and detailed tones, another great feature of the tested speakers is the very wide sound stage. The stage is delineated clearly and very precisely, occasionally expanding beyond the limits set by positioning, although all instruments are placed in the same plane, ie without particularly pronounced depth. Still, the OBERON 3 makes up for it with a lavish high range, which is credited with the close, lively atmosphere and plenty of air between tones. The middle part of the spectrum seamlessly builds on the upper band – which speaks in favor of an optimally designed crossover – while maintaining excellent tonal balance. Simply, OBERON 3 skillfully balances on a thin line that separates dry, documentary display from oversaturation, never losing sight of informativeness, but also noble and musical presentation.

Finally, in the lower part of the spectrum, OBERON 3 greets us with equally precise, but also fairly fast tones. The excellent definition is complemented by a solid mass of bass, but the entire lower range is pulled in relation to the rest of the sound image. The lowest tones are reproduced in excellent quality, but they are less pronounced, so you can get the impression of weak and thin bass, which is not really the case. On the other hand, thanks to less pronounced bass, the OBERON 3 proved to be one of the most appreciative speakers I’ve ever encountered when it comes to positioning, despite the bass reflex opening at the rear. With enough space on the side, they can be placed about twenty centimeters from the back wall without any side effects, which makes them a great choice for small rooms, and experimenting with positioning can lead to an improved response in the lowest part of the spectrum. We also recommend that you pay attention to pairing because we believe that these speakers will please amplifiers and sources with more pronounced, fatter bass.

Packed in a classic form and enriched with a glossy finish, DALI OBERON 3 delivers extremely precise and fairly neutral sound, as well as a very wide stage. Although it faces fierce competition in the class, its trump cards are indisputable, and a slightly more withdrawn lower range can be solved by properly selecting the rest of the system and careful positioning, while in a tight space it can grow into an advantage.

Dali Oberon 3 is a great speaker with extremely precise and quite neutral sound.
Get it now

DALI stands for Danish Audiophile Loudspeaker Industries, a Danish manufacturer of high-end loudspeakers. The company was founded in 1983 by Peter Lyngdorf, as an attempt to comply with the still increasing demands on audio quality from the Hi-Fi community.