After some time I decided to do a speaker review – ELAC Debut ConneX DCB41 Review. So let’s see what we have in a new ELAC speakers model.

The company ELAC continues to renew its offer with undiminished intensity: active sound boxes of compact dimensions and affordable prices.

Over the past few years, we have been introduced to the renewed offer of the well-known German manufacturer, which includes more than ten series of speakers, as well as electronic hi-fi components. Now we have the newest and, when everything is taken into account, probably the most affordable sound boxes from ELAC, because the Debut ConneX DCB41 contains amplification, a digital-analog converter, Bluetooth, and a phono section.

You can download the manual here->ELAC Debut ConneX DCB41 Manual

Although based on the name, one might think that they belong to the Debut line, the DCB41 actually appears in a separate series, which may be expanded in the future with the introduction of larger models. With a height of fewer than 9-5/8 inches, these are very compact monitor speakers, which will do well in smaller rooms, but also as a nearfield setup on a desk. The design is simple and modern, and the classic square shape is refined with rounded horizontal edges and attractive color combinations – the front panel is always made in matte black, while the rest of the cabinet can be finished in walnut, black ash, or blue. In a contrast to the black front, an aluminum strip with the company’s logo is placed in the lower part, and there are also quality cloth meshes available, which cover the entire front.

The DCB41 is designed in a two-system topology, and the manufacturer does not provide too many details about the speaker units. In the upper part of the front, there is a dome tweeter with a diameter of 19 millimeters with a large director, in order to achieve better directionality and dispersion of sound waves. Beneath it is a mid-woofer driver with a 114-millimeter polypropylene diaphragm, along with a long-travel suspension that allows for a great excursion. 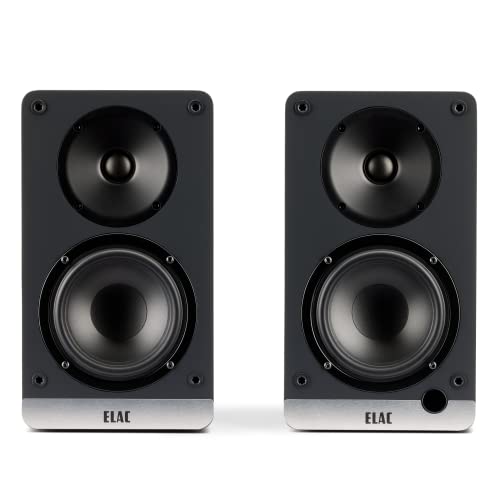 Like most of ELAC’s affordable speakers, the DCB41 has a relatively conservative exterior, while the interesting things are hidden inside the case. First of all, it should be emphasized that the active setup is based on the master-slave principle, which means that the complete electronics are housed in one box, while the other is actually passive and is connected using a common speaker cable.

Amplification in class D is responsible for starting, which has 50 watts per channel and is acoustically harmonized with the speaker units. The manufacturer claims that it is an efficient solution that doesn’t heat up much. Inside, there is also a D/A converter of unknown origin, which supports a resolution of up to 96 kilohertz and 24 bits. Although I could wish for support for an even higher resolution, I believe that the factory set things up this way to avoid installing Windows drivers, which further simplifies use. Then there is a phono preamplifier for MM cartridges, and finally Bluetooth with support for aptX codec.

The connectors are located on the back of the main speaker, and here I find really diverse options. For digital sources, an optical input, a USB-B port for direct connection to a computer, and HDMI ARC, which enables connection and control via a television, are provided. The analog RCA input is equipped with a switch to turn off the built-in phono turntable section, so it can be used as a normal line input. In addition, there is an output for an active subwoofer and a USB-A port for the service application and firmware update, as well as a pair of smaller terminals for connecting a second speaker.

As the basic form of control, a rather large circular control is placed, which can be easily felt under the fingers if you do not have access to the back side, and allows switching on, adjusting the volume, changing the source, and activating Bluetooth pairing – the tiny ELAC will take care of turning it off by itself, because after 15 minutes of inactivity automatically goes into standby mode.

I listened to Creedence Clearwater Revival on their second studio album “Bayou Country” from 1969.

Despite their small dimensions, during reproduction, DCB41 presents itself as a purebred ELAC and brings everything that older and larger relatives from the same house are used to. The speaker units are perfectly matched, and the sound is balanced and refined. I was particularly impressed by the unobtrusive presentation in the spirit of the bookshelf models of the Debut and Uni-Fi series when the speakers do their best to provide the best possible reproduction quality, but without drawing attention to their own capabilities – everything is at the service of the music, and the DCB41 will very soon after switching on disappear from your thoughts and leave you to enjoy good sound.

The lowest range is very well presented and during playback the DCB41 will occasionally delight you with strong and solid bass, which is incongruous with its size. Of course, the laws of physics cannot be circumvented, but you will notice the slightly shallower lower part of the spectrum only when you compare them with significantly larger and in this respect more capable boxes. By themselves, the tiny DCB41 sound is complete, without the impression that anything is missing in the sound, which is the most that can be expected from small boxes.

In addition to the optimally sized drivers and amplification, great credit for good bass goes to the cabinet – its construction is monolithic, solid, and refined with a bass-reflex opening of a specific construction, which is halfway to the transmission line system. Namely, in the upper part of the cabinet, there are precisely calculated partitions that form an S-shaped channel, and the rather long path ends with a slot that stretches across the entire width of the rear side. The manufacturer states that this solution has increased the extension of the lower range while reducing unwanted noise from the port.

The midrange and upper range are excellently built on the bass foundations and the DCB41 forms an evenly presented stage, without highlighting or receding any part of the spectrum. The stage is well developed in terms of width and slightly less in-depth, and the tested speakers redeem themselves with very good separation and a pronounced stereo effect, which enables quite precise determination of the positions of individual instruments. Although they bring a solid level of detail and good resolution, DCB41 delighted me more with the color. The individual tones are exemplary neutral, yet full and juicy enough, so the music sounds vivid in a discreet and unburdening way.

In other words, the active DCB41s are perfect for all-day background listening without fatigue, but if you pay attention to them, you’ll find more than a grain of true audiophile reproduction in their sound. The dedication to good sound did not diminish their practicality, or even the comfort of use, because an elegant remote control of smaller dimensions is delivered in the package. The remote allows you to select the source, control the volume and control the playback with USB and Bluetooth connection, as well as turn off the LED signaling.

There is also a command to activate the patented XBass Enhancer technology, which brings more powerful bass – I used this system occasionally, in tracks with a more subdued lower range, while in most situations the standard ELAC bass was quite enough for me. At the end of the test, I connected the DCB41 via the line input, and the D/A conversion was taken over by the much more expensive Musical Fidelity M6X DAC. The result was as expected: the reproduction has improved – first of all in details and more layered tones, but not so much as to justify the huge difference in price, so the conclusion is that the factory expertly coordinated all the components of the system, which work brilliantly together and complement each other in the best possible way.

Although it cannot be disputed that a large part of the credit for the rise of the company in the previous period belongs to the until recently chief designer Mr. Andrew Jones, ELAC shows that this success is still the work of joint efforts, as well as that they have learned something about making loudspeakers and electronics over the past hundred years. As a textbook example of a versatile and capable hi-fi system – because these are not just speakers, but a system that contains speakers, amplification, DAC, turntable phono section, and Bluetooth – ELAC Debut Connex DCB41 brings possibilities and sound that far exceed their modest size and modest price.