Today I will present you a reference bookshelf speakers in our new ELAC Uni-Fi Reference UBR62 review text.

Although they originated from the basic Uni-Fi UB52 model, the bookshelf representatives of the new Uni-Fi Reference series bring clear differences and improvements at first glance.

In the past few years, ELAC has renewed its offer almost completely, and new series and models have proven in numerous tests that they provide a lot for the money invested. But, despite the great sound and harmonious proportions, the more affordable models of the German manufacturer don’t have pronounced aesthetic values.

The new series of Uni-Fi References is determined to change that, bringing, among many other virtues, a visual atmosphere that is up to their tonal qualities.

After a careful comparison, it becomes clear that Uni-Fi References with the basic Uni-Fi series share only part of the name and the elementary concept. UBR62 represents bookshelf boxes in a three-way topology, with a coaxial tweeter and bass-reflex aperture on the front. All other features and details are completely new or changed to such an extent that the UBR62 can be considered an independent model.

First of all, the cabinets are bigger on all axes, so the new bookshelves look more capable and impressive visually, and the company states that the more environmentally friendly medium-density CARB2 MDF is now enriched with far more serious interior reinforcements to minimize vibration and negative impact on reproduction.  After that, the exterior of the cabinet was finished in wood – ELAC does not state that it is natural veneer, so we will assume that it is vinyl imitation, but at a fairly high level – the surface even has a rough texture to resemble wood, and the finish is flawless. 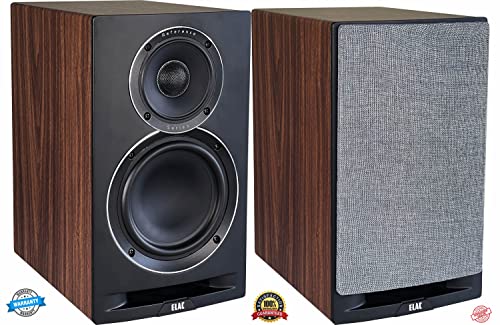 The appearance is further enhanced by successfully selected color combinations, so the walnut cabinet is paired with a matte black front, while the light oak version comes with a white front. We’ve already mentioned that the UBR62 uses a coaxial tweeter – a circuit specifically designed for this series, with a 102mm aluminum midrange diaphragm and a coil of increased diameter compared to the UB52, while the new neodymium magnet allows for increased membrane excursion and better mid-range control. In the center is a dome tweeter with a 25mm diaphragm, which is located behind a protective metal mesh, and the whole unit is placed in a cast metal basket, which is designed for less reflection and clearer sound. The lower part of the front side was also occupied by a new subwoofer unit with a diameter of 165 millimeters, which is equipped with a one-piece aluminum membrane without a cover in the center so that the surface is fully utilized.

UBR62 masterfully displays everything in fine detail, with a pronounced texture and the physical presence of sound.

This unit is equipped with a cast basket and a large ventilated motor, and the manufacturer states that it provides improved linearity and better response in the lower range than previous Uni-Fi models. Finally, at the very bottom of the front, there is a bass-reflex opening in the shape of a horizontal slot, which contains two extensions in the interior. This opening is quite discreet, especially on the model with a black front, and the company logo is integrated into its lower part.

The following difference from the basic Uni-Fi is visible on the back: on a large and perfectly fitted brushed aluminum panel are two pairs of speaker terminals, which allow bi-wire and bi-amp connection, and are made entirely of brilliantly processed metal. The terminals allow all types of connections and are equipped with equally high quality and massive metal jumpers. Above this panel is a sticker with the manufacturer and model designation, serial number, and basic technical features of the speakers.

In this regard, ELAC states that UBR62s provide a frequency range from 41 hertz to 35 kilohertz, with cutting frequencies at 260 hertz and 1.8 kilohertz. The sensitivity is 85 decibels, and the nominal impedance is six ohms, which indicates that this speaker will need a slightly stronger amplifier to show everything it can, so it is not surprising that UBR62 can be paired with amplifiers up to 140 watts per channel.

Like the weaker brother UB52, the new Uni-Fi Reference UBR62 bookshelf speaker requires a certain period of burn-in, and the sound image will improve after just a few days of more intense listening. Namely, after that period, the UBR62 will start to sound very balanced, which is characteristic of ELAC speakers of the new generation.

In the first part of the start-up test, we used the integrated amplifier Exposure 2010s2, which we have known for a long time as a very good connection with ELAC speakers, so great sound was not missing in this case either. One of the most important features of the tested speakers is the elaboration of individual tones – UBR62 really masterfully displays all the fine details, with a pronounced texture and physical presence of sound in the room. Their color is mostly positioned right in the middle and can be considered neutral, but the already well-known magic of Mr. Andrew Jones gives them a vivid presentation and great musicality while retaining serious analytical skills.

The advanced coaxial unit, which controls the high and medium range, creates an almost unrealistically good three-dimensional image – the stage is not so striking in width, which is solid and in line with the speaker size, but already impresses with the depth of the display. Live recordings and quality studio recordings will therefore be presented with a clear positioning of instruments and vocals, which are precisely delineated in space and bring an unusually intimate insight into the music. All this indicates exceptional microdynamics properties, as well as the ability of speakers to create a very quiet background for an even clearer depiction of all subtle details, but it should be borne in mind that such an atmosphere must provide sufficiently strong and stable amplification.

In the second part of the hearing test, our faithful Exposure was replaced by the much more powerful NAD C 399, which provides 180 watts per channel in hybrid digital technology, and this increase in power was mostly reflected in the reproduction of low tones. In this part of the spectrum, the discrepancy between the size of the speakers and the massiveness of the lowest tones is most pronounced, so the UBR62 easily matches the best in its class in this part. The notes are very deep and have a clearly formed body while maintaining a precise display to the limit of audibility. However, the tested speakers do not use this ability often, but rather use powerful bass as a background that permeates the entire sound image, making it an integral part – just as it should be.

For that reason, during the test, it occasionally happened that UBR62 surprised us and almost startled us with an extremely deep bass, which can be felt in the stomach and which is simply not expected from a box of this size. In the end, we had the opportunity to directly compare the UBR62 with the basic Uni-Fi UB52 model, and the results were – expected. Compared to the Reference series, weaker cousins ​​may sound more analytical at first, but that’s a hoax: the thing is in the bass when there is less, it’s drier and shallower and in a way forces the listener to focus on a really great middle and high range. On the other hand, the UBR62 does things differently, providing more complete reproduction and low tones that match the rest of the sound image, so the ultimate music experience is different – more complete, richer, and more playful, but with the same level of detail and precision.

ELAC has once again managed to make affordable speakers which provide exceptional value for money. Although the job was not easy at all, the German manufacturer managed to add to the reproduction everything that you might miss with the smaller UB52 and then packed it all into far nicer and more elegant cabinets. If you satisfy them in terms of the quality of the rest of the system and above all a powerful amplifier, Uni-Fi Reference UBR62 will reciprocate with sound, but also with the look, which successfully matches far more expensive boxes.

ELAC has once again managed to make affordable speakers, which at the price stay around the magical limit of $1000 and provide exceptional value for money.
Get it now
Facebook Comments Box
4.5/5 - (6 votes)